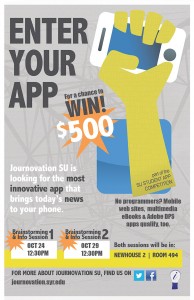 Any SU student who has a mobile app, or mobile-friendly web site, that has journalistic value should consider entering it into the SU Student App competition: http://idea.syr.edu/funding/su-app-competition/
The contest is part of a Syracuse University-wide news app competition. The newly-added Journalism category allows a wider variety of mobile content than just apps, including multimedia eBooks, mobilized WordPress sites, and magazine apps created with commercial tools like the Adobe Digital Publishing suite.
The winner of the news category will receive a $500 prize, funded by the Horvitz Chair of Journalism Innovation, and the winner will be announced on November 28 at a campus-wide “Entrepalooza” event.
Entries must be placed at the site above by November 9, which is coming up soon. But the project itself does not need to be completed until demo day, giving students an entire month to complete and enhance mobile projects.
Following are the current rules for journalism entries. Note that you do not necessarily need to work with a coder to apply (although that can help), as you’re also allowed to use free software for a web site, Adobe tools, or even a tool like iBooks Author to create a multimedia eBook.
Journalism Innovation & Civic Media category definition
Apps or mobile-optimized sites or services whose primary goal is to provide important civic information to targeted geographic or topical communities. Entries in this category must incorporate standard journalistic principles of truth, accuracy, fairness and ethics and seek primarily to inform rather than persuade. Judges will give preference to applications that make use of features that are unique to mobile devices, such as geolocation and user contribution.
Judging criteria for all categories: