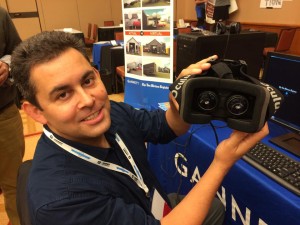 Move beyond just telling stories. Learn how to transport someone’s consciousness into a story to experience it using virtual and augmented reality headsets like Facebook’s OCULUS QUEST, the VIVE and mobile AUGMENTED REALITY publishing tools.

Virtual Reality is particularly relevant at a time when most can’t travel due to COVID-19. You’ll gain practical, hands-on skills for shooting and editing 360 VIDEO, and building interactive 3D environments in SUMERIAN and the UNITY GAMING ENGINE to be able to take people places virtually that go far beyond what’s possible in in 2D video chat. Parts of some classes will even take place inside social VR environments, rather than Zoom, using new cloud-based technologies that work with your computer or mobile phone.

This class is very production-oriented, but changes have been made to the course plan to make it possible to produce coursework completely online for those unable to attend in person while giving students who come to campus safe access to 360 camera gear and professional VR headsets. The final project is to create your own immersive story, which is a great option for journalists and storytellers who want to stand out in job interviews as experts in VR. Topics covered include: