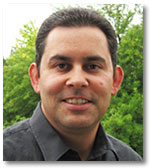 Dan Pacheco is a digital journalist with 18 years of experience in news and information startups and new product development. After a year as a feature writer for The Denver Post, he joined the launch team for Washingtonpost.com in 1994, where he produced its first business, technology and community sections. He later spent six years at America Online launching and managing user-contributed content services.

In 2004, he joined The Bakersfield Californian, where he launched Bakotopia, the first social networking service for a local newspaper, and multiple web-print niche products. His work there earned a Newspaper Association of America “20 Under 40” award and two Knight-Batten Awards for Innovation in Journalism. The home-grown Bakomatic platform that powered these sites was purchased by the Arizona Republic and Sacramento Bee.

In 2007, Pacheco was awarded an $837,000 Knight News Challenge grant to run Printcasting, an experiment in cloud-based magazine creation. The service evolved into BookBrewer, an eBook and Print on Demand startup that is used by journalists, news organizations and self-published authors.