On Thursday we went back into SU’s Manley Field House with a camera-equipped dji Phantom drone to perform some new test flights. Our goal this time was to get aerial footage of a few typical football plays, including short passes, long passes and runs. You can watch the video here:

While it’s a little choppy (an issue that can easily be addressed with the addition of a gimbal), we got some good results and were able to show how aerial photography can be a safe, effective way to get footage that is difficult or impossible without the use of a drone. You can see the best example near the end, where the drone follows a player during a long pass.

Covering a casual practice is one thing, but it’s difficult at this point to say how this type of footage could be captured safely with more players on the field, not to mention a live audience in the stands and coaches and players on the sidelines. Thankfully, we’re not the first to attempt this, and we most certainly won’t be the last. Fox Sports in Australia is already well into its second year of drone-assisted sports journalism with its FoxCopter, and the FAA specifically mentioned “communications and broadcast, including news/sports event coverage” in a roadmap document about the introduction of unmanned aerial aircraft systems in the U.S. The question of using drones to cover U.S. football games is a matter of “when,” not “if.”

We want to thank Bob Brotzki, Assistant Football Coach, and Steve Scarnecchia, Director of Football Operations, for their participation. Both are featured in the video along with other SU football staff members. 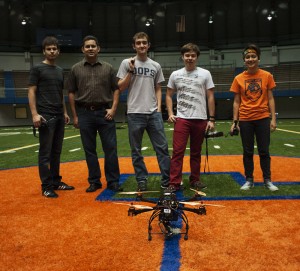 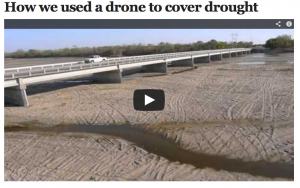 S.I. Newhouse students return to class on Monday, just in time to RSVP for our new Digital Edge Seminar series hosted by Journalism Innovation Chair Dan Pacheco. The first in the series is about inexpensive flying camera drones, which will allow journalists to get aerial footage that previously was only possible by renting a helicopter. Here are more details about the event, for which you can RSVP on Eventbrite. (Be sure to do that if you to partake of food.)

DRONES ARE COMING TO JOURNALISM 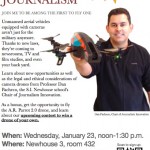 Unmanned aerial vehicles equipped with cameras aren’t just for the military anymore. Thanks to the FAA Modernization and Reform Act of 2012, they’re coming to newsrooms like 60 Minutes and CNN Money, TV and film studios, and even your back yard.

Learn about new opportunities as well as the legal and ethical considerations of camera drones from Professor Dan Pacheco, the S.I. Newhouse school’s Chair of Journalism Innovation.

As a bonus, get the opportunity to fly the A.R. Parrot 2.0 drone, and learn about our upcoming contest to win a drone of your own.

When: Wednesday, January 23, noon-1:30 p.m.
Where: Newhouse 3, room 432
RSVP: http://newdrone.eventbrite.com
Light snacks will be provided with your RSVP.